In my opinion, Trump is a psychopath. As a clinical psychologist, I have some relevant expertise to back up that opinion: I have worked with one of the world’s experts on psychopaths, published empirical and theoretical work on psychopaths, interviewed psychopaths in prison in order to diagnosis and learn about them, and have encountered them 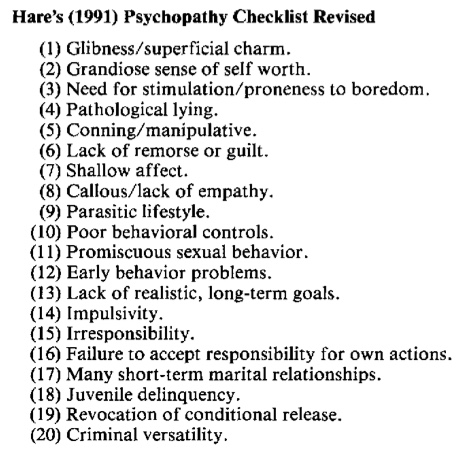 in my clinical practice (there is a section on psychopaths that I wrote in this chapter; more about my credentials and publications here). Although an interview and file review are needed for an official diagnosis (and I have not interviewed Trump and do not have access to any of his private information, including any crimes he may or may not have committed), it is pretty clear that he has psychopathic traits (see also, this article) and will continue to act impulsively, cruelly, dishonestly, manipulatively, and without remorse when it suits him. This is a personality problem that we don’t know how to treat. Trump deserves our compassion but not the presidency. [For a discussion on the ethics of psychologists discussing public figures’ diagnoses, see this article from the LA Times about therapy and Trump, this article from Psychology Today discussing the “Goldwater Rule”, an ethical rule for psychiatrists (but not other health professionals), and this article from Psychology Today that presents a different perspective].

If that effort fails, then what? Can we please learn four lessons?

First, our election system is a disaster. Every citizen should be able to vote, it should be easy to vote, our votes should be counted and verifiable. But that’s not what’s happening. First, it doesn’t appear to have happened at the level of the Democratic primary (see, for example, this article). Second, it did not happen in the general election. “Love trumps hate” was a nice slogan, and though most voters cast their ballot in that direction toward Hillary (she won the popular vote by about 2.2 million votes), the electoral system (which has not yet been changed), partisan gerrymandering (recent victory here in WI with potentially national implications), and systematic disenfranchisement gave us a different result. [More on disenfranchisement — an article, a Democracy Now video; also see Michael Moore’s “Where to Invade Next“ (2015) for his hypothesis about the drug war as a way of disenfranchising black voters in particular; see here for efforts to recount votes for the current election.] But, wait, there’s more! Our intelligence agencies have determined that Russia did, in fact, intervene to help Trump win (article), though the U.S. has consistently intervened in similar ways to influence elections in other countries (article). See this article for a debunking of Trump’s nonsense about landslide victory. And, let’s not forget that all of this is on top of the fact that only 25% of us elect a president in a normal year anyway.

Second, not forgetting the fact that Trump didn’t win, I hope that it’s more likely that hate didn’t trump love. Instead, I hope that maybe — at most — hate and racism and misogyny was ignored by people in favor of rebelling against a system (both Republican and Democrat) that has ignored them/us for too long. For example, our economy has almost doubled wealth since 2000 (even with the 2008 recession), but most of that went to the already rich (see this post) and unemployment remains high (see this article for more details).

We have to stop hating and otherizing (e.g., racism, sexism) those who voted for Trump or Hillary Clinton, a hatred often based on social differences that (while important) distract us from the more fundamental problem in our culture: inequitable distribution of resources. The only choices available to us for understanding each other are laid out in this article: we either pretend to get along, resort to silence and/or violence, or we have to learn how to disagree skillfully. Only by disagreeing skillfully (a simple but difficult act of love – if you are a Christian, remember “love thy neighbor as thyself“) can we get to reality because multiple points of view have truth in them. So, we have to understand each other because only by doing so will we get close to understanding reality. And solving problems is always more successful if those solutions are based on reality (see this excellent article emphasizing this theme and this article emphasizes the social technology needed to do so).

I would guess that we will achieve understanding only if we actually talk (instead of only interacting via social media). See, for example, this NY Times podcast series in which friends who voted differently talk to each other. Understanding does not mean agreement, but I’m afraid we have mostly lost the ability to disagree skillfully. I say this partly based on my experience with patients (not as biased a sample as some might believe) but also based on my work with couples who, despite sharing their lives, children, sex, and love, often find if very difficult to actually have what I would simply call a “real conversation.” Instead, avoidance is the norm (see this article on avoidance and intimacy strategies). Stonewalling is a very popular and effective way of preventing dialog — people simply stop talking. It’s the strategy I most often encounter when trying to have a real conversation with someone I disagree with online. But the other 4 horseman of a relationship apocalypse are popular when stonewalling fails: defensiveness, criticism, and contempt.

The third lesson we need to learn is that we have to stay awake (mindfulness is one tool). That means staying awake to reality. There are many ways to fall back asleep. Here are just three examples:

This list could go on, but it would be good if we stayed awake this time.

The fourth lesson involves what we need to be awake to. Part of what we need to stay awake to is the fact that our society, like all societies, is fragile. Ignoring that just makes things worse.

And, the fractures evident now with Trump’s election are not new. He didn’t cause them, he just reminded us they were there and perhaps clarified their nature. In fact, the fractures in our system have been present since the beginning (see this article) and, many of the problems of wealth inequality, environmental and human exploitation — and the otherizing that distracts us from these fundamental problems — are integral to the system of organizing life that we call civilization. So whether Trump destroys this country or not, we have been on a track for bad stuff for a while now. Our country’s democracy started with only 2% able to vote, we had to survive a civil war, in modern times only about 25% of adults in this country elect our presidents (here), and there is evidence that our democracy is actually an oligarchy. Indeed, you could argue that our current culture is the largest, most unethical failure in human history. Let’s stay awake to these issues.

There are various responses when we are awake, ranging from being persistently active in our political systems (e.g., the ACLU, Citizen’s United, Bernie Sander’s Our Revolution, and donating to Greg Palast’s documentary and follow-up investigation of systematic disenfranchisement) to voting with your wallet, spending your money with companies that do not support Trump’s police-state tactics and ideals (see this article describing the boycott Trump movement, grabyourwallet.org) to embracing some level of resiliency planning. I would guess that engaging in all of them is advisable (spread your eggs in multiple baskets).

Finally, we should also be engaged in long-term solutions that are  ethical and sustainable.  Most of this site is dedicated to such solutions, approaches to help create lifestyles of flourishing on one planet’s worth of resources — one planet thriving.

For an interesting take on Trump from Noam Chomsky and then the case being made that racism was a key factor in the election, see this news interview.

4 thoughts on “A Psychopathic President, Staying Awake, and One Planet Thriving”