Energy is one key physical technology (to be used on conjunction with social technologies) in moving from our dysfunctional status quo to a future of thriving on one planet’s worth of resources (one planet thriving). Multiple solutions are necessary, including stirling engines, alcohol, biofuel, rocket mass heaters, and more.

Notes from Lowell talking to Frank Steinhart, the chairman of Sun Orbit, on 12/2/16. There is no one in the U.S. yet to help market the Sun Pulse Stirling engine. The Sun Pulse can be used to pump water, or generate electricity and heat. It can also be used in reverse (Coolpulse) to provide refrigeration.

“The Sunpulse machine can be used very well as a refrigeration machine and heat pump in reversible operation (Coolpulse). In contrast to conventional refrigeration compressors, no environmentally damaging refrigerant is necessary. Even thermodynamically, good performance figures are achieved, for example when cooling 25 ° C to the freezing point, the power factor of 5. A typical application is the combination with photovoltaic: If the power of a 500 Watt panel drives the Coolpulse by an electric motor during the day, 2.5KW cooling capacity (up to 15KWh of cooling energy per day), which can provide cooling around the clock in conjunction with a cold store.“

Some technical details from Sun Orbin for the Sunpulse 500. 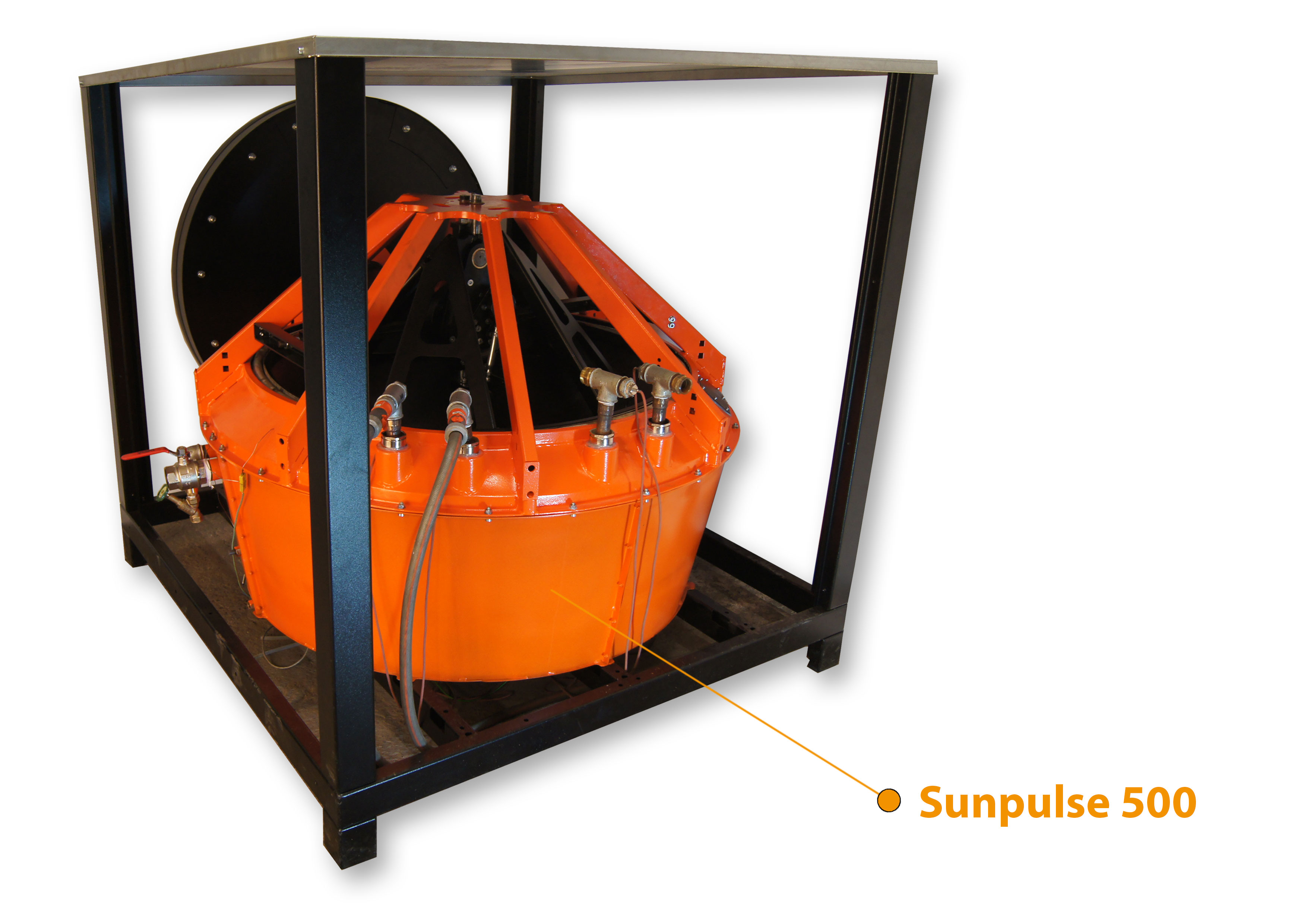 Sun Orbit is also developing thermo-chemical storage systems in which solar energy is used to separate two industrial liquids. When energy is needed, the two liquids are combined which releases heat. Thus, summer heat and light can be stored and used in the winter. Thus, there may be no need to burn wood for heat or cooking. The storage tanks for the liquids don’t have to be very big. This is in the development phase.

Stirling engines can generate electrical and mechanical energy using oxygen as a gas and differences in temperature to achieve power. In Tamera‘s experimental solar village, physical technological systems, invented by Jürgen Kleinwächter. The technologies are marketed by Sun Orbit in Germany (previously they were marketed by Sunvention which seems to no longer be in business as of 5/6/16) but both of these companies appear 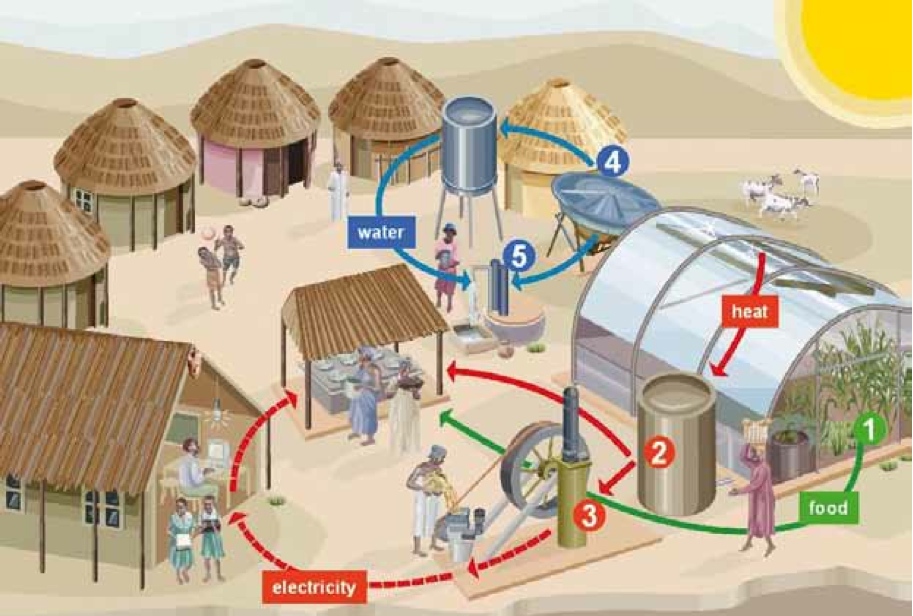 to be difficult to get to, either for purchasing systems or understanding how to build them (open source designs anyone?). His systems include a greenhouse (#1 on picture to the left), with optical focusing and solar cells as well as heat transfer and storage to a closed-loop oil system (#2) at a temperature of 150 degrees C which can be used to generate heat for all forms of cooking (boiling, roasting, baking, deep-fat frying) and one or more locations in the village.  The oil can also be used to power a low-temperature Stirling machine (#3, see also the Sun Pulse 500 water system) that uses air as its working gas to generate electricity (1.5 kW output). The entire system can generate heat and cooling.

Here the inventor explains his system:

In the following video, Jürgen Kleinwächter explains why a low temperature Stirling engine was chosen for development.

Most of the examples of Stirling motors/engines on the web are small and, based on comments by Jürgen Kleinwächter, less efficient as a result. But, here is another example of a larger Stirling engine.

Inresol has home-level Stirling technology. Ripasso has a unit that boasts 30% efficiency (the Sun Pulse is about 15% mechanical energy but co-generates heat and thus approaches 100% efficiency). Segway inventor Dean Kamen keeps promising a home-based Stirling engine, but appears to be focusing on larger $10,000 units first (article). And WhisperGen looked to have promise as well but no longer appears to be made. Open Source Ecology is designing the 50 machines needed for civilization, but they are favoring steam engines (kits available: Contact Gary at USA 313.418.9316) over Stirling engines at this time (article). However, there are some open source projects being attempted by others.

Red River college developed a solar-powered (not PV) Stirling engine introduced in this video. It is significantly smaller than the Sun Pulse 500 (as you can see).

Another small, solar-powered Sterling engine in action with instructions on how to build one.

A demonstration of a sterling engine in Aurora, India:

Featured image is from Sun Orbit.

10 thoughts on “The Energy of Stirling Engines – Notes”