“It is enough that the people know there was an election.” J. Stalin

“When the electorate believes that elections have been free and fair, they can be a powerful catalyst for better governance, greater security and human development. But in the absence of credible elections, citizens have no recourse to peaceful political change. The risk of conflict increases while corruption, intimidation, and fraud go unchecked, rotting the entire political system slowly from within.” – Kofi Annan, Deepening Democracy: A Strategy for Improving the Integrity of Elections Worldwide (p. 3)

“Global recession and rising economic inequality are putting pressure on many democracies, including older ones, to show that they are relevant to citizens’ concerns and well-being.”

A 2014 study (pdf) conducted by Gilens and Page at Princeton (covered by various articles in the popular press, including the BBC) concludes that the United States is no longer a democracy. Rather, it is an oligarchy in which wealthy elites control public policy often in contradiction to majority wishes:

It’s not black and white, but there is a significant asymmetry in influence. For example, the authors write that “A proposed policy change with low support among economically elite Americans (one-out-of-five in favor) is adopted only about 18% of the time, while a proposed change with high support (four-out-of-five in favor) is adopted about 45% of the time.” Furthermore, “When a majority of citizens disagrees with economic elites and/or with organized interests, they generally lose. Moreover, because of the strong status quo bias built into the US political system, even when fairly large majorities of Americans favour policy change, they generally do not get it.”

The Imperative of Revolt, an article by Chris Hedges, focuses on a worldview presented by Sheldon Wolin and John Ralston Saul. They argue that our current political system is an “inverse totalitarian” system with the veneer of democracy legitimizing and disguising the fact that power is now almost totally in the hands of a tiny corporate oligarchy. Suggestions for what can be done are covered briefly.

In his book, Capital in the 21st Century, Thomas Picketty documents a trend for increasing concentrations of wealth (see this article on wealth distribution) and says in a New York Times interview: “I believe in private property. But capitalism and markets should be the slave of democracy and not the opposite” (full article here).

Finally, there is the historical fact that when the United States was founded, only 2% of the adults here qualified to vote — this consisted of white male landowners. Is 2% voters out of a population really democracy? It’s more like oligarchy. See this article on the history of voting in America (but it doesn’t cover what percent of all people could vote).

A related point is that due to low voter turnout and various elements of disenfranchisement (ranging from long lines at polls to gerrymandering political districts, but not including voting machines with no verifiable paper trail), typically only 25% of the voting age population elect our presidents (source).

Critical to a democracy are elections that are free, fair, and transparent. The Perceptions of Electoral Integrity Index has been used to study the quality of democratic elections across countries and individual states. The United States scores fairly well compared to many parts of the world (being 52nd in the world), but does not perform as well as Canada and many countries in Europe. 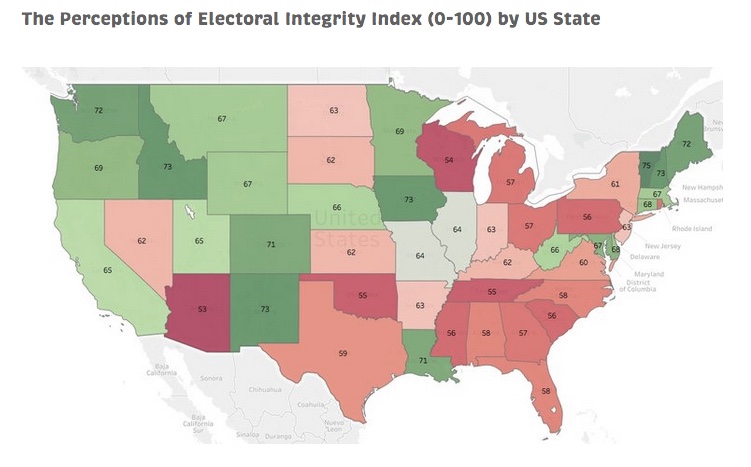 Differences in election quality are also evident at the state level. According to the Electoral Integrity Project, the governments of 13 states are less democratic than countries we don’t consider democratic (e.g., Sierra Leone or Cuba). “If it were a nation state, North Carolina [with a score of 58] would rank right in the middle of the global league table — a deeply flawed, partly free democracy that is only slightly ahead of the failed democracies that constitute much of the developing world,” Reynolds wrote (see article). The other 12 states are: Alabama (58), Michigan (57), Ohio (57), Georgia (57), Rhode Island (57), Pennsylvania (56), South Carolina (56), Mississippi (56), Oklahoma (55), Tennessee (55), Wisconsin (54), and Arizona (53; see report; see this site for more about electoral integrity, a scholarly topic that gained significant traction with this 2012 report from the Global Commission on Elections, Democracy and Security, Deepening Democracy: A Strategy for Improving the Integrity of Elections Worldwide).

1 thought on “The United States of Oligarchy?”