In talking about life at the Dancing Rabbit Ecovillage, Dan Durica writes, that people living there have time “…for other fine things in life…like watching fireflies, going for a quick swim before dinner, or taking long walks with friends.”

This inspired in me the “cocaine-firefly tangent” that I sometimes share in public talks. That tangent goes something like this:

…”fine things in life like”….wait for it… 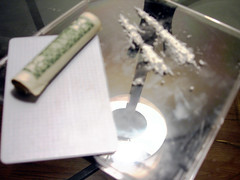 Such is the contrast between our modern culture and Dan’s fireflies.

But, what if we actually could enjoy fireflies? What if modern culture is the perfect way to train our brains to need more and more stimulation for the same level of enjoyment? As our brain adjusts to the more stimulating input by reducing the dopamine squirt it releases for MORE, we demand even more MORE to achieve the same dopamine squirt. Thus, it’s reasonable to hypothesize that training our brains to expect less will actually jack up the dopamine squirts it receives when it confronts something like fireflies if it hasn’t been deluged by cocaine-induced dopamine down-regulation. In other words, if our brains have adjusted to give us one squirt of dopamine for a snort of cocaine, there’s no way a firefly is going to give us that same squirt. Or, to put it differently, if our brains have learned to expect a lot of dopamine, our level of enjoyment per unit of dopamine may decrease. But, if our brain has been trained on a diet of slow and mellow (see Mindfulness meditation, for example), it is quite reasonable to expect that our brain might really enjoy those fireflies…probably never to the wired, buzzed, manic degree associated with cocaine, but is that really desirable anyway?

This Cocaine-firefly Principle is potentially very important given the need for us to maximize sustainable well-being by enjoying more and using less. So, for our sake and for the sake of the planet, maybe we should be slowing down, training our brains that moments are not fast and frenetic like video games, or charged, like cocaine, but slow and changing like grasses blowing in the wind, beautiful and enjoyable, like fireflies.