Humans are liars. A great deal of scientific research demonstrates that most people lie, especially under the “right” circumstances. Do a search for Dan Ariely, a Professor of Psychology & Behavioral Economics at Duke University, and you will find many mainstream press articles summarizing his work. This article is about the documentary, (Dis)Honesty: The Truth About Lies, which highlights Dan Ariely and the scientific research on this sub-topic of behavioral economics: lying.

There’s a line between honest and dishonest. How do we behave as humans? What variables cause us to cross that line? These are some of the questions answered by this excellent review of scientific research about lying.

Is lying good or bad?

The movie views lying and dishonesty as unethical and that point of view is a theme throughout the film. They do have a brief discussion on ethical lies or the benefits of lying. One scientist describes how lying and “dreaming big” increases with brain size (e.g., chimps lie to other chimps) and help children develop a more accurate theory of mind. One man tells the story about lying to a woman on an airplane to help reduce her fear about the plane’s response to turbulence. Specifically, he told her he was an engineer and they were perfectly safe: “Better to die with someone telling you a nice lie.” They also highlight a Mom who got her kids into a much better school by claiming residence in a different neighborhood. She was arrested for fraud as a result and later in the movie expresses deep regret — she’s honest Abe now. If you are interested in thoughts about this issue, see this post, “Robin Hood & Other Ethical Cheating“.

There is a line between honest and dishonest behavior. How far can we cross that line and still consider ourselves good

people? This is what Ariely describes as “the fudge factor”, the grey area we are semi-comfortable operating in. As long as we cheat just a little, we get the benefits for ourselves of cheating, but do not lose our own self-image of being a good person. For example, the speed limit is 55, are you ok driving 60?

One of their primary experimental paradigms Ariely and his colleagues use is the Matrix Task, a page of 20 math problems, each in the form of a grid like the one pictured. The task is to circle two numbers that 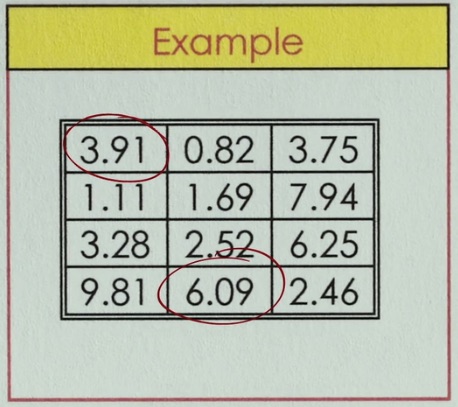 add up to 10. They have five minutes to complete the page (which is insufficient for everyone) and get paid for each problem they complete correctly. At the end of the time, the experimental participants bring up their math problems to the front and shred them without anyone verifying their answers. They then report the number of problems they got correct and are paid accordingly. The experimenters are able to learn who lied and by how much because the shredding machine is rigged to only shred the sides of the papers. The results: with a sample of 40,000 people, nearly 70% cheated on this task. There were about 20 big cheaters, claiming they solved all 20 problems, but there were about 50,000 little cheaters. The economic impact was much larger for the 50,000 little cheaters.

What variables change the levels of lying?

How do we get people to behave better?

If we don’t, we’ll get more disasters like the 2008 financial crisis. The Isha Vidya school in India is profiled: everyone is honest, including at their “honesty shops” where students pick out and pay for supplies on their own without supervision.

You can prime morality and that reduces cheating on the matrix task. e.g., After priming the 10 commandments (regardless of the student’s religion and how many they remembered) or swearing on the Bible, or signing on an honor code (whether or not the school actually has an honor code), nobody cheats on the matrix task. A 1-week course in morality, has no effect — it is the priming of the moment that is more important.